Our trip is a celebratory voyage of sorts, complete with champagne and oysters shucked out fat and creamy on the half-shell. Local conservationists – some of them along on today’s trip – have recently learned that their quixotic effort to preserve Pleasure House Point has succeeded…

But perhaps no outcome is as potentially delicious as the continuing recovery of these renowned fancy oysters… Back on the Lynnhaven, oyster farmer Chris Ludford serves us samples of his product, which fetch up to $21 a dozen at local restaurants. It’s the salty – but not too salty – taste from the mix of Lynnhaven water and water from the bay that elevates these oysters above all others, he opines, adding, “If that development had gone in, my business would not exist.”

Soon Ludford will be farming oysters within sight of the new environmental education center.

When you see it, it’s going to blow your mind.

I wanted to take a closer look, so I contacted Chris Ludford, one of most enthusiastic of the oystermen.

Ludford, who works fulltime as a fireboat captain for the city, spends much of his free time growing and harvesting oysters on the river. It’s crazy, he admits, spending all this time on the water, but he clearly loves it—the waders, the oyster cages, the outdoors. One morning I went out with Ludford and two friends, Jerry Boothe and Ray Hunter, to a channel through the marsh and watched him cull through his latest crop. A puppy drum jumped as he dropped anchor from his 18-foot Parker Sou’wester.

The baby oysters he had bought in May were about two millimeters, he said. “When you see it, it’s going to blow your mind.”

And of course it did. The babies in fine mesh baskets were the size of quarters. And the ones that had been around for nine months were about three inches and just about ready for market. Chris picked up a couple of the larger cages and culled through the oysters, returning smaller ones for more growth, eliminating the ones that had opened, and selecting several dozen of the larger ones. He placed them in plastic baskets and polished them by gently shaking them and then plunging them in the water.

“It’s almost like panning for gold,” he said, the wonder of it all in his voice.

Chris and Chef Rodney of Terrapin talk about temporary closure of the Lynnhaven due to Superstorm Sandy.
Visit WVEC.com to view video November 2012

Ludford’s oysters are tonic to the palette, so fat and firm one wants to describe them as crisp. 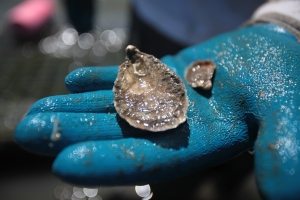 Just offshore from the new CBF center, against a backdrop of heavy traffic streaming along Shore Drive across Lynnhaven Inlet, Chris Ludford pulls up his aquaculture cages and offers for the shucking a few choice Lynnhavens from his small oyster farm. He’s one of several oyster farmers at work on the river now, planting millions of bivalves annually.

Ludford’s oysters are tonic to the palette, so fat and firm one wants to describe them as crisp. A strange term for a slithery invertebrate, but I am upheld by famous foodie MFK Fisher in her classic, 1941 book, “Consider the Oyster”: “for me one of the pleasures of eating a raw oyster is the crispness of its flesh.”

…is growing in popularity and our region has the quality of product to help anchor the branding effort.

Right now we are growing a lot more oysters than we have in 10 years,” said Chris Ludford.

The Virginia Tourism Corporation says the mollusk is growing in popularity and our region has the quality of product to help anchor the branding effort.

At restaurants like A.W. Shucks in Norfolk like it partly because of the freshness. They buy their oysters from Ludford.
Visit WVEC.com – June 14, 2012

…a plump mouthful of meat that starts with a bracing blast of brine and finishes with a rich oyster flavor and a speckle of sweet.

Ludford doesn’t have to imagine.

Like a growing number of commercial oyster farmers in Virginia, he knows exactly what’s inside his brand of bivalve – in Ludford’s case, a plump mouthful of meat that starts with a bracing blast of brine and finishes with a rich oyster flavor and a speckle of sweet.
Visit Pilotonline.com – February 25, 2012

Thank you for your kind words.

Thanks to Steve Earley whose photographs appear on our Farm & Press pages..